Sustaining Personalized Learning: Problems and Suggestions to Reverse the Trend of Education Failure in United States 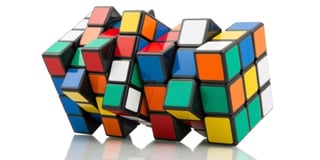 In an era in which many districts are considering making significant pedagogical shifts in their districts (such as the shift to personalized learning or other models of teaching and learning), the idea of how to make those shifts last longer than the tenure of a leader is more important than ever.  As the superintendent of the Enlarged City School District of Middletown, a district undertaking several big initiatives, I am keenly aware of the importance of making the work we are doing stick.

In 1990 Karen Seashore Louis and I wrote that most school improvement efforts focused on the early years of the change cycle. Relatively little attention had been given to the last stage: institutionalization. Educators and policy makers often seemed to assume that after they implemented a restructuring effort, it would automatically endure. Unfortunately, that was (and is) not true, and disregard for the institutionalization process helps to explain why so many school improvement programs disappeared. If we spend a decade focusing on what to change and how to change but give little attention to preserving the change, we will fail (Eastwood & Louis 1992).

Unfortunately, not much has changed since we wrote those words.  More initiatives start in our classrooms and schools than sustain.  And their failure to last is less often a function of impact, and more often the result of leadership not putting in place the systems to make an initiative last beyond their tenure.

Michael Fullan and Joanne Quinn, in their recent book Coherence, write about the need for school systems to build shared meaning, capacity and commitment to action (Fullan & Quinn 2016). In one of their four elements of coherence, “Deepening Learning,” the authors identify what I believe is a critical need to “foster collective capacity building to mobilize a consistent shift in practice.” I emphasize “consistent shift”  (p.81) because it implies a persistent or sustained effort to make permanent the new practice/innovation/pedagogy.

Lack of leadership tenure in school districts may be the single most important reason why this shift often does not occur.  This challenge is one that teachers have historically understood better than academics when they talk about “waiting out the new thing” (Eastwood 1990). Many teachers expect that they will see several initiatives during their careers, while experiencing very few enduring changes.

The New York State School Boards Association in 2006 calculated that the average tenure for a school superintendent was 3.6 years; a 2014 Brookings Institution study found it to be only 3.3 years. Brookings noted that the “school district superintendent is largely a short-term job” and that “superintendents whose tenure is associated with sizable, statistically reliable changes in student achievement in the district in which they serve, controlling for the many other factors that affect student achievement, are quite rare.” (Bianchi, A. 2003).  Three to four years is not nearly enough.

Through the lens of my experience with managing successful innovation and school improvement efforts in multiple districts, the full lifecycle from initiation of an idea to institutionalization of a new approach can take as long as 9 years, far longer than the average leader stays in his or her position. 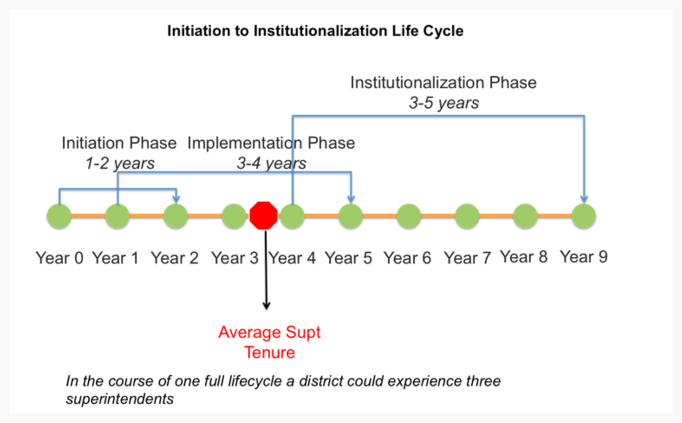 Initiation: The development of a vision and then the planning that is necessary to move all of the district’s constituencies into a readiness for implementation takes at least 1-2 years.

Implementation: I have found success starting that phase with a two-year volunteer model in order to build capacity and validation for others to feel more comfort to follow. The third year is generally for the 5-8 percent who need a more direct type of motivation and the fourth year, is what I call the year of solidification, where continuation of feedback, practice and data analysis is paramount to build a sense of mastery and further build justification for sustaining the change/innovative effort into an institutionalized practice/program.  This phase is 3-4 years.

Institutionalization: This Phase could take 3-5 years or longer and focuses on avoiding digression from the plan or vision and prohibiting downsizing. It is also a time to be cautious of allowing flexibility as too much often leads to a lower percentage of use and weak or no institutionalization.

Additionally, this is the time to re-establish pressure and assure that this change program stays on the front burner. This is also the time that new leadership often comes into the scene, creating new efforts that erase the push and accomplishments of the previous program implementations.

Finally, during this time a district needs to take emphatic steps to incorporate the change initiative into the culture. At Middletown we accomplish this by requiring all new employees to be properly in-serviced and mentored to mastery of the program’s intent and pedagogy. Read Restructuring that Lasts: Managing the Performance Dip (Eastwood & Louis 1992) for a full description of our recommendations to increase chances for institutionalization.

We have only to look to Digital Promise’s League of Innovative Schools for an example of superintendent tenure’s positive impact on academic achievement and the successful shift from implementations to institutionalization. Members of the League of Innovative Schools currently represents 3.2 million students in 73 districts and 33 states. They reflect the diversity and shared challenges of public education in America. Selection to membership requires evidence of improvement in school and student performance, sustained over time.

The average tenure of the superintendents in these districts? Well over five years.

In the totality of it all though, those superintendent are anomalies. But what about the vast majority of schools and districts that do not want to, or for whatever reason, cannot hold on to their leadership. Are those schools and districts doomed to constant change without improvement?  Does the three to four year tenure mean what they start will never be finished?

My experience and observations are no, they do not, IF the leader assumes that there is a need from the onset of any improvement or change effort, to build in place, strategies that might accelerate the implementation stage and push to sustainability even without that leader at the helm.

In the Enlarged City of Middletown School District, where I am currently superintendent, we have had our share of struggles.  And yet we have turned the district around.  Graduation levels have increased from 54% into the low 80 percentile and mid 80s if you include 5th & 6th year students. The subpopulation with the highest graduation rate is black females, with percent of graduates going to college reaching just over 80% with 26% and growing, taking college courses during their high school experience.

Why do I mention this? For no other reason than to point out that even when handed a worst-case scenario, schools can improve and ALL children can learn well and be successful.  But this doesn’t happen overnight and not without sustainability.  Every move we have made has been deliberate and thoughtful.  And our planning has not been focused on only the early years, from the start of each initiative we are thinking ahead to institutionalization.  We are focusing on how to start and how to sustain.

We have been called visionary by some, but our success is based on developing interventions and strategies based on current research around school improvement and change.  Fullan & Quinn’s in Coherence and the work by Karen Louis and others are just some examples of the work that has influenced our thinking.  And we are seeing it pay off.  Our district-wide focus on blended learning is a good example of one of our current eleven district initiatives and how strategies for acceleration of the implementation and shift to institutionalization can be accomplished.  (Learn more about this work here.)

Through this work, and other initiative before it, we found that that the two most powerful and impactful approaches to implementation and shifting to institutionalization were:

If American education wants to truly improve its quality and competitiveness in the global world, it needs to find ways to keep its leaders, especially its superintendents, in the district for longer than the metaphorical blink of an eye. It also needs to identify strategies for assisting and accelerating the shift in district or building initiatives to institutionalization regardless of leadership tenure. The literature is ripe with rich research on how to successfully implement innovative and educational improvement programs. We even have numerous examples of successful program implementations in schools.  The real challenge is to not only increase and successful implementation but to reverse the persistent failure in education relative to institutionalizing those many successful implementations that have been created.