On January 28, 1986, the space program experienced one of its most catastrophic events to date when the Space Shuttle Challenger broke apart just over a minute after launch. All seven crew members died, including Christa McAulliffe, a school teacher who would have been the first teacher in space. If you’re familiar with the event at all, you know the accident was caused by a failed O-ring seal in the solid rocket booster.

What’s less widely known is that, according to the recently released Netflix documentary, Challenger: The Final Flight, NASA and the company that manufactured those O-rings had information available to them that day that could have led to a different outcome. For example:

NASA made choices about the data they used that day. They went into their decision-making process with a bias (they were motivated to launch after a series of delays), and they failed to see how that bias motivated their choices and in turn influenced their behavior.

In education, we make choices about our data, too.

We decide what information is more important to use (which test, whose evaluation, even the subjects, classes, and grades that matter most). As a researcher and former educator, I believe in the power of data and fully support continuing to use this kind of information to drive our decisions. The problem, however, is that we still struggle from DRIP syndrome: schools are Data Rich and Information Poor.

Schools are data rich and information poor. We believe that developing and nurturing data culture can serve as a vehicle for more informed and more equitable decision making.

Drawing from our collective experiences in school systems across the country, we believe that developing and nurturing data culture can serve as a vehicle for more informed and more equitable decision making that will lead to a better educational experience for all students. But our experience has shown us that there are some consistent missteps school and district leaders (and those of us who support them) take that diminish the potential of their data culture.

These are the 6 easiest ways we diminish data culture in schools.

1. Designing a data system for accountability and compliance.

Too often we see that decisions about data are driven by who is asking – the school board, the state department of education, or even the federal government. The data is collected in an attempt to evaluate which schools are failing and which are not, but do little to support those who need to use the information to impact change. When data culture is USER-CENTERED, however, end-users (principals, teachers, and ultimately students) can easily access, understand, and use data in their everyday practice. Decisions about data are driven by the needs and priorities of these end-users rather than compliance and accountability.

2. Only collecting and prioritizing standardized-testing data.

For over a century we have relied almost exclusively on standardized testing data, which has led to deeply embedded decision-making practices in schools based on limited, and often misleading information. In a HOLISTIC data culture, however, decisions about which data to collect and the extent to which the data is used are representative of the whole child and a comprehensive view of the factors shaping their educational experience.

3. Not taking the time to design a data strategy.

Without a strategy about what data to collect and for what purpose, ad hoc data collection typically results in a district having a bunch of information about a topic that doesn’t really matter to them, and very little information to answer the questions they actually care about. When data culture is ALIGNED, leaders are using data to both identify the most pressing barriers to student success and to monitor the impact of efforts they use to solve for those barriers.

4. Implementing policies around your data that slow down the flow of information and limit transparency.

Often these policies are well-intended. They’re born out of a desire to protect data quality, or possibly more important, data security. But information has an expiration date, and the need for speed in sharing information has increased rapidly in recent years. We no longer think in terms of days and weeks, much less semesters. We think in terms of instant and hourly updates and responses. When data culture is RESPONSIVE, systems, policies, and practices support timely, in the moment iteration and can quickly evolve in response to the ever-changing needs of the end-user.

Too often, well-intentioned leaders delegate decisions about data to a select few (cabinet leaders, or an information or accountability office), who are also responsible for analyzing that data. Their inherent biases are rarely named and neutralized, and then decisions about how to use that data are made by an even smaller select few. In a data culture that PROMOTES EQUITY AND INCLUSION, intentional efforts are made to collect information representative of all stakeholders and to shine a light on areas of inequity or injustice, and individual and collective biases are named and neutralized. Externally, the power provided by information is eagerly distributed, especially with commonly disenfranchised populations by promoting transparency, dialogue, and shared decision-making.

6. Connecting your data system to just one leader or level of leadership, so that when that person leaves, so does your system.

In many school systems, there is a singular data champion. Just one person to advocate for the power of data and the need to invest in continuing to collect and use it. But best in class school data systems are designed to be SUSTAINABLE by embedding them at all levels–the district, the school, and the classroom. Stakeholders at all levels have access to the information, reason to use it in their practice every day, and have been coached on how to do so. They experience the power of data and therefore become champions at every level.

Is there anything that you, your school, or your district is currently doing that in any way, shape, or form resembles these missteps? Be brutally honest and list all of the behaviors, habits, programs, and/or policies that are diminishing your data culture. Underline and circle those you think are doing the most damage and identify the next best step to changing that behavior, habit, program, or policy. And because you can’t do this alone, think through the stakeholders you need to bring on this journey with you.

Need ideas? Join us for our webinar, Data Culture is for Everyone, on November 17th. 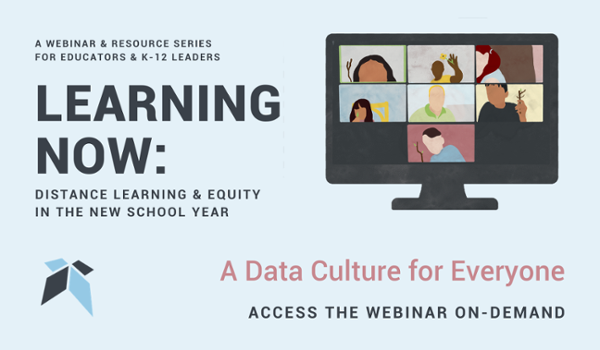