Personalized Learning: Toward a Healthy Learning

As I was thinking about big mindset shifts, these advertisements caught my eye. The first one says “more scientists and educators smoke Kent”. The point here is that educated and smart people smoke this brand. The other advertisement says that there is “scientific evidence” that people who smoke Chesterfields saw “no adverse effects on the nose, throat and sinuses”.  Yes, scientific evidence that this brand is safe.

Prior to 1964, most of the advertising around cigarettes suggested you were smarter, cooler, thinner, or more desirable if you smoked them. In 1964, 42% of Americans adults smoked but since that year, when the first Surgeon General’s report on the negative impact of smoking, the number has declined to only 18% of American adults.. A big decline but it took a very long time to get there.  But a healthy lifestyle is not just about not smoking. The World Health Organization defined a healthy lifestyle as “A complete state of mental, physical, and social wellbeing, not merely the absence of disease”.

Many of the initiatives I see in education feel like the strategy that anti-smoking campaigns used. Factual but rooted in fear tactics. They focus on why you should quit smoking and what will happen to you if you don’t. This approach only resulted in an average of 0.5% improvement per year over 50 years. Fear was not enough to overcome the idea of being cooler, thinner etc.  Nor was it enough for people to stop doing something they enjoyed, had always done, and that everyone else was doing. Those ads didn’t change anyone’s minds, or help them to think differently about their actions or the consequences of them. In order for us to see faster improvements in education, we need to focus on mindset. I have written  about the PL Mindset before, which includes: 1) belief that every child deserves personalized learning; 2) personalized learning is a continuous process; and 3) you have to be creative and learn by doing.

Education Elements had our annual Personalized Learning Summit in San Francisco last week. It was a huge success. But it was even better to see so many leaders from districts like Syracuse City School District, MSD Warren Township, Fulton County Schools and Yuma School District One, all with this mindset. The leaders in each of these districts made a choice.  It was not based on being cooler, nor was it based on fear.  It was grounded in what they knew would be better; it was a decision to do something “healthier” for their students.

I want to reinforce that personalized learning is both a mindset shift and a lifestyle choice. Healthy learning means that we aren’t just trying to quick fix or catchup standards level skills. I think about balanced and healthy learning based upon my volume of learning model I describe for CompetencyWorks.

In my upcoming book with Alexis Gonzalez-Black, we are focusing on the future organizational structure of school districts and schools. In our work, we are finding that organizations which are best prepared for the future are alive, have purpose, and evolve. The people in these organizations need to think about learning as a healthy lifestyle. The term “lifelong learning” might come to mind, but this is different. Lifelong learning talks about ongoing, voluntary, and self-motivated learning, but doesn’t talk about the quality of learning.

Let’s not be like cigarette advertisements which went from “it’s cool to smoke” to “you will die if you smoke.” Something like that only moved the needle 24% points in 50 years. We have to promote a more well-rounded and new mental understanding towards a healthy learning lifestyle. As I agree with what Alex Hernandez writes in “Stop Trying to Define Personalize Learning”, I’ll double down on that and say we have to just start living it in our schools. 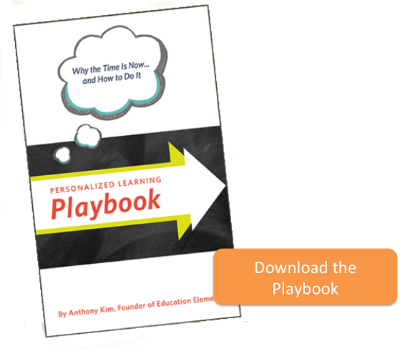 Anthony Kim is a Corwin Press bestselling author, with publications including The New Team Habits, The New School Rules, and The Personalized Learning Playbook. His writing ranges the topics of the future of work, leadership and team motivation, improving the way we work, and innovation in systems-based approaches to organizations and school design. Anthony believes that how we work is the key determinant to the success of any organization. He is a nationally recognized speaker on learning and his work has been referenced by the Christensen Institute, iNACOL, EdSurge, CompetencyWorks, Education Week, District Administration, and numerous research reports. In addition to his writing, Anthony is the founder and Chief Learning Officer of Education Elements, a trusted partner and consultant to over 1,000 schools nationwide. Anthony has been the founder of several companies across multiple industries, including online education, ecommerce, and concerts and events.