The Future of Learning is Now

The Jaquelin Hume Foundation’s mission is to accelerate the implementation of high quality blended/personalized learning in America’s schools. Seventeen plus years ago when I joined the Foundation as its executive director, the mission was much different. It was geared to promoting school choice in all its forms mainly through grantees who advocated for it at the policy level. I was working in the trenches of the most confrontational aspect of education reform, trying to get laws passed to authorize vouchers, charter schools, tax-credits scholarships and education savings accounts. This occupied the first nine years of my career and led to mounting frustration with the incremental and glacially slow progress the reform movement was making. All the while, it was obvious to me that urgent measures had to be taken to radically transform the educational opportunities America’s children had as they entered the 21st century.

Then in 2005, I had an epiphany. I had the opportunity to meet Clayton Christensen, the Harvard Business School professor who coined the term “disruptive innovation,” at the Education Commission of the States’ annual conference where he gave a keynote address. Professor Christensen was planning to apply the disruptive lens to social issues and education was his first priority. As he spoke, it became clear to me that the only way to have an impact on the K-12 education industry (a $650 billion business at last count) was to introduce the use of technology to improve its product and increase its productivity. It was unconscionable that the most important workers in America, our teachers, charged with preparing our children for the future were deprived of the many tools that every other worker was routinely adopting.

In the next couple of years, I was informally involved with the writing of the book, mainly serving as a sounding board to one of its co-authors, Michael Horn. During that time, I was proselytizing for the introduction of technology as an integral part of the curriculum, a mantra that mostly fell on deaf ears. However, with the publication of “Disrupting Class: How Disruptive Innovation Will Change the Way the World Learns,” the conversations changed and the idea began to gain traction. The Hume Foundation was the first funder of Innosight Institute’s Education Practice, the think tank established by Clayton Christensen as well as Michael Horn to promulgate disruptive solutions to both education and health care challenges, and I became a founding board member. (Innosight Institute later changed its name to the Clayton Christensen Institute.)

From 2009 to 2011, following the book’s publication, the Hume Foundation made grants to Rocketship in the Bay Area and Carpe Diem in Yuma, AZ, two charter schools that were already implementing blended learning, to promote their models. It also helped launch KIPP Empower Academy in Los Angeles whose blended design was Anthony Kim’s first project that led to the formation of Education Elements. At that time, the only schools we could find that were innovating as whole school models were charters. Our investments were small but in the 2011–2012 school year, the Gates Foundation, the Broad Foundation and the Charter School Growth Fund made combined grants in this space of some $40 million.

So we were off and running. Although it was in charter schools that blended learning first took root, it turned out, counterintuitively since they were launched to be innovative, that they were not all that eager to get on the blended learning bandwagon. Because of that and because charter schools were experiencing enormous push-back from the education establishment, they did not seem to be the answer to the proliferation of blended schools and the Foundation decided to turn to the state of Rhode Island whose Education Commissioner, Deborah Gist, was very interested in exploring blended learning.

In February 2012, Michael Horn and Anthony Kim working with the Rhode Island Department of Education invited a total of 300 district superintendents and teachers to a day-long meeting to introduce them to the concept of blended learning and to the enormous potential of integrating technology into the curriculum to help students learn and teachers teach. This event was pivotal for the Foundation’s strategic plan because it demonstrated that it was possible to partner with traditional public school districts and it led us to make similar seed investments in Washington, D.C. and Oakland, CA.

The trustees regarded these as necessary proof-points to demonstrate that blended learning could be implemented and also improved the performance of students. All the while, our main emphasis was in the public policy area where we funded national organizations advocating for the necessary legislative and regulatory changes to create the environment in which blended learning could thrive. Prominent among those were the Alliance for Excellent Education, the Clayton Christensen Institute, the Foundation for Excellence in Education and iNACOL.

In 2013, the Foundation made a major $5 million investment to start up The Learning Accelerator, a non-profit created to insure that the ecosystem was robust enough and effective enough to power the implementation of high quality blended learning at the classroom level. With the support of The Learning Accelerator, Education Super Highway launched the federally funded EdConnect initiative to bring adequate broadband to America’s classrooms, a fundamental requirement for technology empowered blended learning.

The Hume Foundation continues to be laser focused on our mission. With the passage of the ESSA and the proliferation of competency-based learning models replacing the traditional seat-time ones, there is an exciting window of opportunity to line up the various elements that will make transforming our education system possible.

Personalized learning is an idea whose time has come. The Foundation was an early supporter of Education Reimagined and I participated as one of 28 strange bedfellows in the production of its vision document. That document has become the North Star for the transformation of a 100-year old educational system which no longer serves America’s children. Among the other signatories of document are the two leaders of the NEA and AFT, evidence that there is a consensus for an entirely different approach to the learning experience.

Along the same vein, L. Todd Rose, a faculty member at the Harvard Graduate School of Education where he teaches educational neuroscience, has just authored “The End of Average” where he explains the scientific, moral and philosophical underpinnings of personalized learning. This is a seminal book that challenges the core of the American education system and, together with all the good work that those of you in the trenches are doing every day, that will revolutionize the way our children learn. 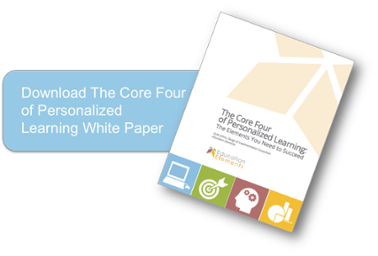 Dr. Gisèle Huff is the executive director of the Jaquelin Hume Foundation in San Francisco. - See more at: http://learningaccelerator.org/about-us/board-of-directors#sthash.MMbx4P52.dpuf