Reflections on Why Our District Personalizes

In Middletown, we are personalizing education, not standardizing it!

In 2004, the Enlarged City School District of Middletown, New York, found itself in a whole lot of academic trouble. We knew that we were not necessarily any different than most other high-minority/high-poverty school districts; our performance numbers of a 54% graduation rate and an even a greater percentage of students who were not proficient in either math or literacy mirrored other similar school districts.

Over the next few years things seemed to become more problematic as our student population grew by over 11% (6,412 students to 7,117) and students within poverty grew from 59 to 76%. For reference, the percent of minority students climbed from 61% to 81% of the student population during this time.

With significant population growth and an increase in student need, all of the predictive elements for school success seemed to be working against us. But we also knew that we wanted better for our students and community; we were determined to make changes, regardless of the educational statistics forecasted.

When we started reviewing the research and visiting successful turnaround districts, we quickly learned that there were identifiable differences in how successful schools with high-need students approached instruction, compared to the schools that were not succeeding with similar student demographics.

In successful high-need districts, we found that there was a clear and purposeful approach to identifying individual student needs and providing a variety of instructional approaches and resources for each student. In comparison, in those schools that were unsuccessful, instructional practices were more “traditional” with whole group instruction at a singular (or standardized) instructional pace. Academic intervention was also provided by both types of schools, but the unsuccessful ones again had very traditional “pulling out” of students vs. “pushing in” of resources.

About this time the standards movement also began to grow and we noticed a movement toward more standardized pedagogies and resources across all school demographics. Teachers were forced to stick to a rigid instructional pace for fear of not covering all of the required State or Common Core standards and used very specific--and usually commercial--curricular resources that were “approved” for instructing the standards. In many cases these included instructional strategies and resources that we had identified as counterproductive to the needs of students, and yet they were taking root in classrooms everywhere, including Middletown’s classrooms.

It is also ironic that globally, countries like Shanghai and South Korea, which were identified as educational models of success due to their highest performance on the PISA (Program for Student Assessment), whose education systems the U.S. should be emulating, were “turning away from the Standardized agenda in order to cultivate skills and attitudes in students that the standards movement has been systematically stifling” (1). We are finally accepting the fact that standardization can have large negative effects on the creative skills needed to be successful in the modern workforce.

Interestingly, Yong Zhao, a Foundations Distinguished Professor in the School of Education at the University of Kansas, also identified that “an inverse relationship exists between countries that do well on standardized tests and those that demonstrate entrepreneurial flair.” This is a leadership attribute that is essential for healthy economies and one of the same leadership talents that seemed to distinguish successful high-needs districts from others.

It was for these exact reasons that Middletown came to identify a need to personalize education for our students and move away from the “standardized” instructional attributes and outcomes of the Common Core State Standards. We decided to take a more “personalized” instructional approach to teaching around similar curricular goals.

We started thinking along these lines in 2004, as we sought to improve our academic outcomes, but it has only been since 2013 that we have begun to fully put it into practice. Once we focused both on providing training and support to teachers, while also giving them and students the technology that made personalization more viable, we were able to more comprehensively understand and realize the potential of personalizing learning. Moving away from standardized education has accomplished perhaps even more than we expected. The rewards have been many for our students as core-subject proficiency, grit, and success in college courses have soared alongside this year’s graduation rate, which reached an all-time high of 85%.

But most importantly, through the educational respect for each child’s learning style, needs and outcomes, our students are graduating in higher numbers as “life-ready,” not just academic ready. Personalized education tends to respect their individual learning needs and attributes; standardized education ignores them.

I am proud that our graduation rate has been on the rise and that each graduating student represents a young adult who is more prepared to enter the world and succeed in it, more so than our students of 12 years ago. This is why we wanted to personalize, and why we will continue. Our students deserve it.

--
About the author: Dr. Ken Eastwood is Superintendent at the Enlarged City School District of Middletown, New York. 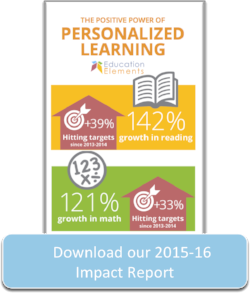